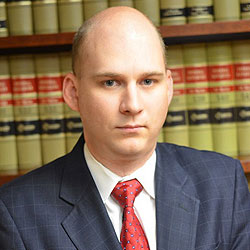 James Polk is a graduate of Hofstra University School of Law and practices in the areas of Criminal Defense and Immigration Law. Prior to founding Mazzei & Polk, LLC, he was a staff attorney at the Nassau County Legal Aid Society for five years. While at the Society, James was initially assigned to the District Court Criminal Division and distinguished himself as a litigator as well as a zealous advocate of those accused. He tried numerous cases and his career highlights include the suppression of all evidence in a significant counterfeiting case as well as successful trial defenses of numerous resisting arrest charges.

Recognizing the need for better addressing mental illness among the criminally accused, James was assigned as Legal Aid’s representative in the creation of the Nassau County Mental Health Court. While in this capacity, James was able to shape the court to better suit the needs of people suffering from extreme mental illness. He was asked to lecture and teach Continuing Legal Education classes in this area of practice.

After District Court, James was promoted to the County Court Bureau where he was assigned to represent people accused of all nature of Felony Offenses. While in County Court, James became very knowledgeable with regard to vehicle and traffic felony offenses, specifically Driving While Intoxicated (DWI) charges. He studied breath and blood testing and the significant scientific flaws therein. Also, James extensively studied the ground-breaking Ignition Interlock requirements under the recently passed Leandra’s Law and has been recognized in this new area. After significant flaws and problems with the Nassau County Crime Lab were revealed to the public, James immediately filed one of the first motions challenging the results of breath testing in DWI law. He also conducted one of the first pre-trial hearings on the problems with the crime lab and has been a vocal advocate for greater disclosure and significant change in its methodology.

Since founding Mazzei & Polk, LLC James has continued his reputation as an exceptional litigator. He has represented clients in a number of high-profile cases involving all nature of felonies and has appeared on ABC News 7, Fios 1 News, News 12 Long Island and NYC and has appeared in print in the New York Times, Newsday and The New York Daily News. He regularly appears as a legal commentator in the area of Criminal and Immigration law on Cave Comedy Radio which reaches over 1 million listeners. His work in these areas has earned him the acclaim of clients, fellow attorneys and opposing counsel as well. He is currently admitted to the bar in the State of New York, as well as the Eastern and Southern District of the New York Federal Courts.

Prior to his work at Mazzei & Polk, LLC and the Legal Aid Society, James worked with inMotion Inc. in the Bronx, a non-profit that represented indigent victims of domestic violence in family and immigration court proceedings. He also worked at Freedom House, a refugee shelter in Detroit, Michigan that represented foreign nationals seeking political asylum in the United States.

James was the recipient of the Charles H. Revson Fellowship for public interest work. He was also a recipient of the Glenn J. Winuk Endowed Memorial Scholarship and a member of the Public Justice Foundation at Hofstra University. Prior to Hofstra, James attended Eastern Michigan University, where he was a founder and the Vice President of the Mock Trial and Mediation Club. He was a member of the Pi Sigma Alpha and Phi Kappa Phi honors societies and was the intern of the year in the Political Science Department. He graduated Magna Cum Laude. He is currently a member of the Nassau County Bar Association and the New York State Criminal Defender’s Association.

Originally from Ann Arbor, Michigan, James lives in Queens, NY. He is a contributor to the Metropolitan Opera Society and a member of Lehigh Sportsmen’s Association. An avid outdoorsman, when not working, he can be found fishing the trout streams of the Northeast.

The lawyers specialize in Immigration, Criminal, DWI and Traffic law.